The concert featured the participation of the winners and finalists of the last editions of the Ángel G. Piñero International Classical Guitar Competition, Luca Romanelli (Italy), Stanislav Steshenko (Ukraine) and the Chagall Quartet (Spain), who performed works by Ángel G. Piñero, as a contribution to his great career as a composer. Special guests were the soprano Estíbaliz Martyn (Spain) and the dancer Manuel Garrido (Spain), from the Opéra National de Paris. The guitarist Roman Zorkin (Russia) was scheduled to participate, but for reasons beyond his control, he was unable to travel to Madrid to take part in the tribute to Ángel G. Piñero. 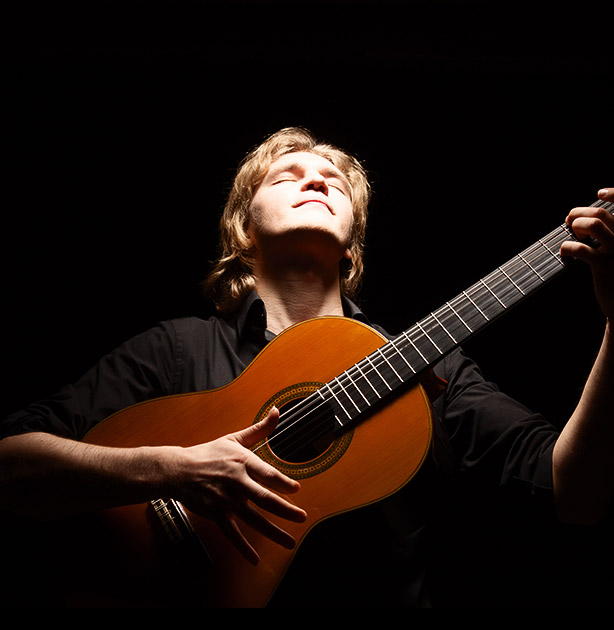 Roman Zorkin is a guitarist, arranger, composer, laureate of many international level competitions all around the world.

Roman Zorkin's concerts are always a bright and thrilling occasion for any audience, from music enthusiasts, to people who simply enjoy guitar music. Because of the unique repertoire, author's arrangements, styles ranging from the Balkan folk music to classical, jazz, argentine tango, Brazilian samba and many others, Roman's concerts are unlike any other guitar concerts.

In addition to his concert performances, Roman Zorkin is also a successful teacher, his class of students being one of the best in Russia. During his work as a teacher he has raised over twenty-five laureates of All-Russian and International competitions.

Roman has been a member of the jury in the biggest guitar competitions in Russia. He is also a frequent participant of methodology seminars, gives open lessons dedicated to the different problems of performance on the classical guitar, and is the author of the project "Zimniaya gitarnaya shkola" ("Winter guitar school") in the Tambov State Musical-Pedagogical University of S.V. Rachmaninoff.

Roman graduated from the Gnesins State Musical College (class of laureate of International competitions Bardina A. V.), then from the Gnesins Russian Academy of Music (class of Honored Artist of Russia Komolyatov N. A.). During his studies he became a scholarship holder of the Government of Moscow, scholarship holder of the "Molodie Darovaniya Rossii" ("Gifted Youth of Russia) foundation, and a prize laureate of the Ministry of Education and Science of the Russian Federation.

He has attended masterclasses of such famous guitar players as Zoran Dukic, Pavel Steidl, David Russel, Ricardo Gallen, Alvaro Pierri. Roman Zorkin has had several concert tours abroad, and tours in Russia that had spanned as far as Siberia and the Far East.

Roman's development as a guitarist was unusual, even unique for a classical musician. After acquiring a sublime academic education, he has constantly broadened his stylistic horizons by taking part in several creative projects, both musical and theatre. 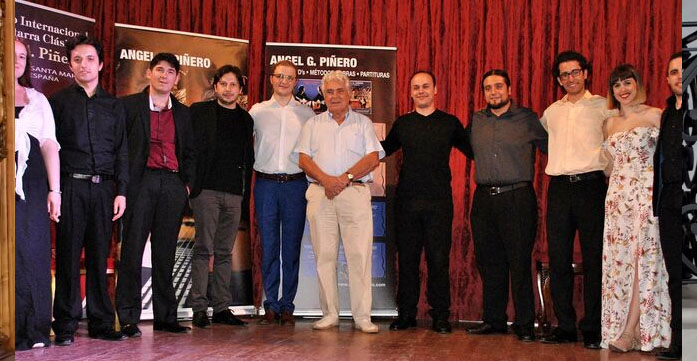 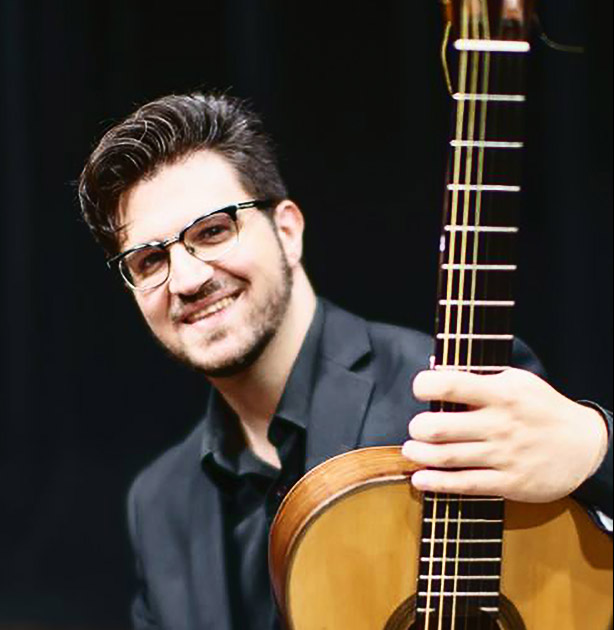 Luca Romanelli is a young Italian who began playing classical guitar at the age of 11 and who is currently a guitar professor at the IMC Sant'Elpidio a Mare (FM) in Italy.

He has already recorded two CDs, the first “I" in 2015 including music by Bach, Rodrigo, Giuliani and others, the other “Elogio" dedicated to Leo Brouwerfor for his 80 years in 2019.

Luca performs in numerous concerts in Italy, Austria, Germany and Romania as a soloist and as a member of the Marche's Guitar Orchestra and the Münster Gitarre.

He collaborates with the composers M. Angel G. Piñero, M. Silvio Catalini, M. Kacha Metreveli and M. Redi Marku in the diffusion of their guitar works in his concerts and through registrations.

Luca Romanelli plays on a Gioachino Giussani specially built for him in 2017.

Before entering the conservatory, he obtained the 2nd Prize at the City of San Severino Marche Competition in 2004, winning the two subsequent editions in 2005 and 2006. He attended the Conservatory of GBPergolesi in Fermo until 2011, when he moved to the Rossini Conservatory of Pesaro, where, in 2015, under the guidance of M. Pietro Antinori, he graduated with honors, the praise and the Honorable Mention, highest mark ever achieved in the School of Guitar in Pesaro. After graduation he continued his studies in Germany with Reinbert Evers, especially in understanding the works of Bach and the Contemporary European Composers. 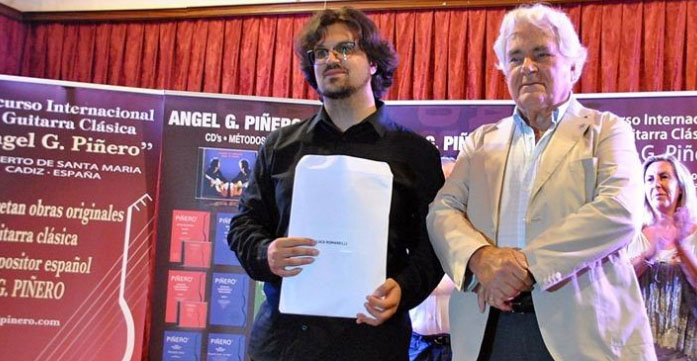 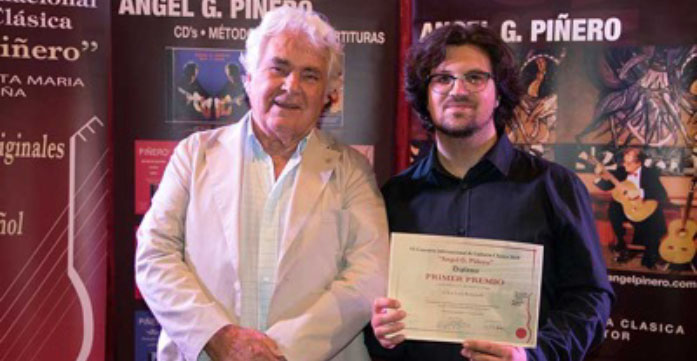 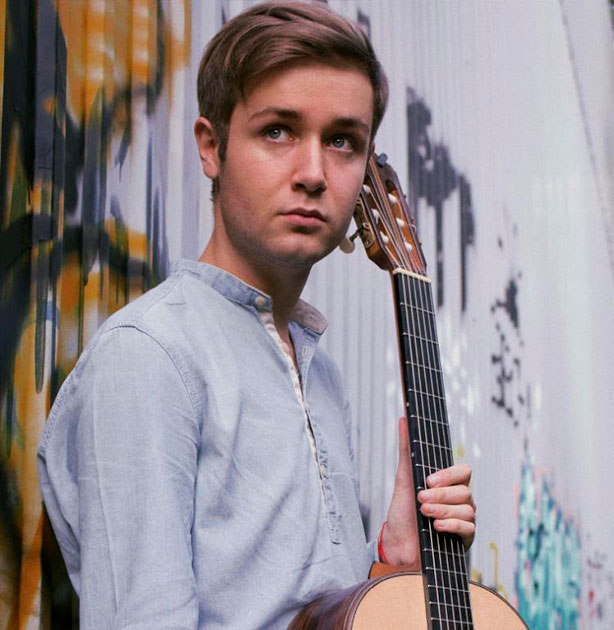 He continued his studies at the Kiev University of Culture and Arts and at the Kharkiv National University of the Arts (Kotlyarevsky), where he had Zhadko V and DotsenkoV as professors.

Stanislav has participated in regional, national and international competitions and contests in Ukraine, Poland, Russia, Germany, Greece, Belgium, Spain and Croatia. He is the main performer of works for guitar by Ukrainian composers and collaborates with the “Kyiv Soloists” orchestra.

He is currently studying at the University of music and performing arts Munich (Prof. Halasz), with a scholarship from the DAAD Foundation.

Stanislav Steshenko was born 15.01.1996. At the age of five Stanislav began to learn vocals and piano, and later at the age of 9 years he begins to study guitar in Mirgorod music school (teacher Kasyanenko M,2004-2011) Graduates from the Kyiv Music College named after Glier (2011-2015, teacher Drozdova O).

He is currently a student at the Kyiv University of Culture and Arts (prof. Zhadko V.) and Kharkiv National University of Arts named after Kotlyarevsky (prof. Dotsenko V).

Stanislav Steshenko is a participant and winner of regional, all-Ukrainian, international competitions and festivals in Ukraine, Poland, Russia, Germany, Greece. Stanislav is the first performer of the premiere compositions of Ukrainian composers. Including collaboration with the orchestra “Kyiv Soloists”. 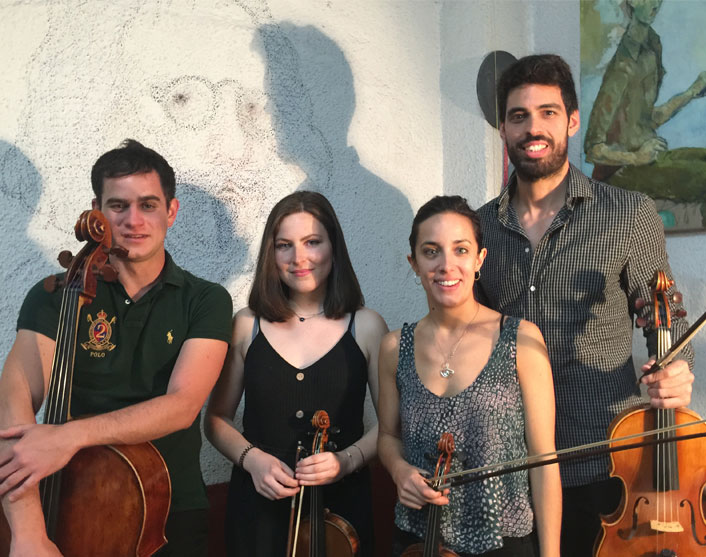 The quartet has given a large number of concerts both nationally and internationally, including its participation in the festivals "Clásicos en Verano" and "Arte Sacro" of the Community of Madrid, in several concert cycles in Boadilla del Monte (Madrid), in the cycle "Las soirées de Riaza" (Segovia), MusaE cycles supported by Acción Cultural Española and the MECD, Juventudes Musicales or the concert given in the Teatro de la Zarzuela in Madrid in commemoration of the 115th anniversary of the SGAE (Spanish Society of Authors and Publishers).

On the international scene, it is worth mentioning the concert tour as guest quartet at the "Junger Künstler Bayreuth Festival" or their concert at the Teatro Massimo Bellini in Catania, both with great critical and public acclaim. They have also given concerts in Saint Jean de Luz and Biarritz (France).

They performed at the COMA’17 contemporary music festival in Madrid. In July 2018 they performed in El Puerto de Santa María, Cádiz, where they were invited to accompany the finalists of the "V Concurso Internacional de Guitarra Clásica Ángel G. Piñero".

Estíbaliz Martyn (1993), Spanish soprano, began her studies in piano, dance and drama at a remarkably very early age and graduated from the Escuela Superior de Canto in Madrid at the age of 21, subsequently perfecting her studies at the Hochschule für Musik Franz Liszt Weimar (Germany), Royal Northern College of Music in Manchester and Trinity Laban Conservatoire in London (UK).

She has been awarded in numerous national and international competitions and has won the Juventudes Musicales Prize for three consecutive years under the Honorary Presidency of Their Majesties Queen Sofia.

At the age of 22 she played Doña Inés de Ulloa on the Gran Vía Madrileña, as the protagonist of the world premiere of "Don Juan Tenorio, sangre y fuego". Later, she gave life to Mesalina in the opera "I, Claudius" (Robert Graves) at the Roman Theatre in Mérida and at the Euskalduna Palace in Bilbao. She played Totó at the Teatro de La Zarzuela in Madrid, closing the season (2018) with "24h mintiendo", by Mtro. Fco. Alonso.

She has performed in numerous concerts and productions, both in Spain and abroad; in 2019 she replaced Ainhoa Arteta in the Unicef Concert held at the Auditorio Nacional de Madrid; she is the opening performer at the 59th Semana de Música Religiosa de Cuenca and has worked at the Macerata Opera Festival 2021 (Italy), in the production of La Traviata, directed by Henning Brockhaus.

Estíbaliz Martyn is part of the first edition of the Teatro Real's Crescendo Programme (2021). 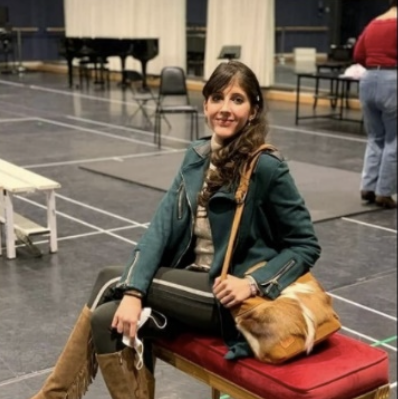 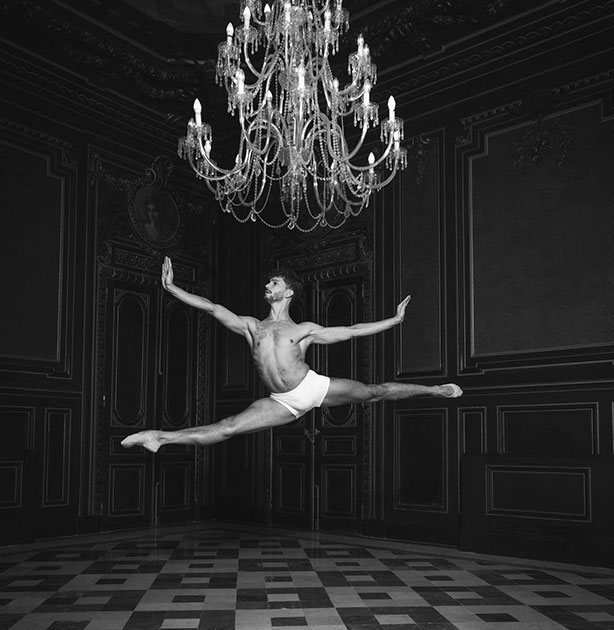 Manuel Garrido was born in Jerez in 1995. At the age of 11 he began his classical ballet studies at the “Escuela de Música y Danza Belén Fernández” where he participated in several performances and national competitions while studying at the RAD (Royal Academy of Dance). In 2010 he had to move to Ecuador where he continued his classical dance studies with Rolando Sarabia, star of the Cuban Ballet.

After passing through the School of American Ballet, Canada’s National Ballet School and the Vaganova Ballet Academy, he got his first job as a professional dancer in the Prague corps de ballet with the Czech National Ballet for the 2015/2016 season.In 2016 he got a position in the corps de ballet of the Teatro alla Scala in Milan. Since 2017 he has been part of the cast of dancers at the Paris Opera ballet. 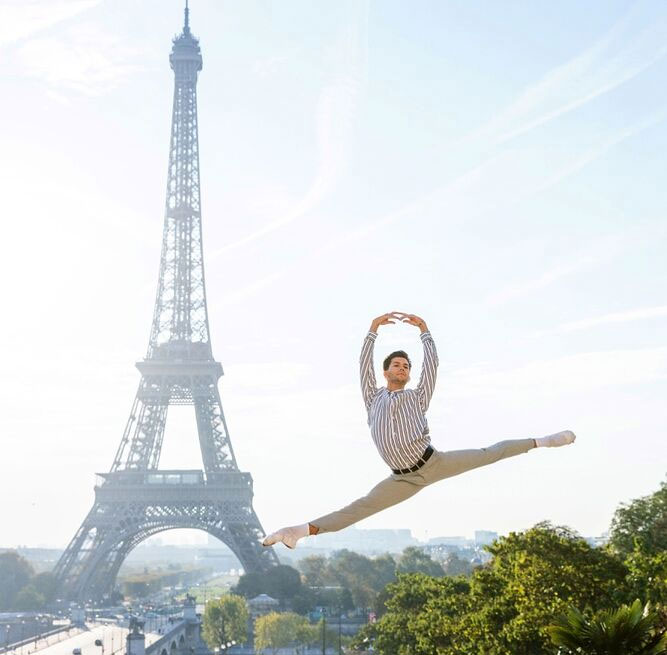 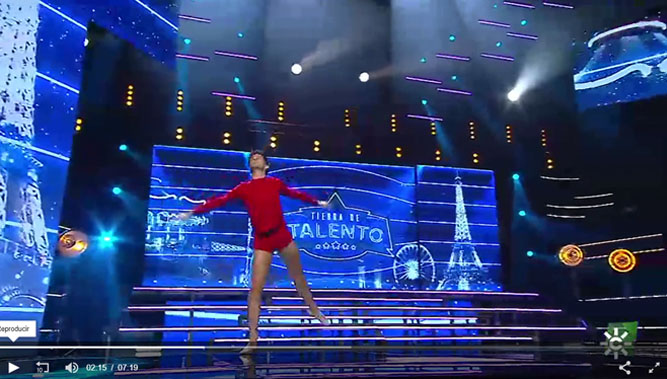 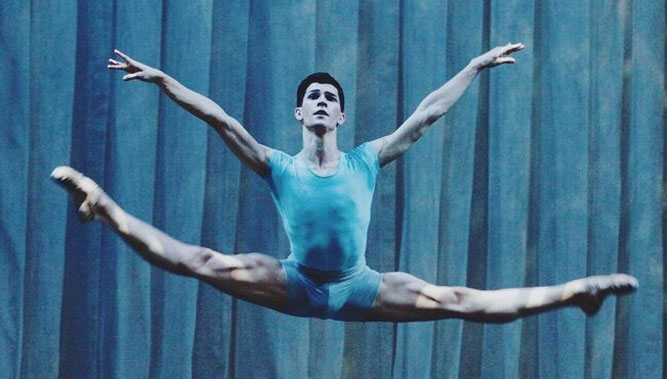 A special thanks to Francisco Aibar for the audiovisual material